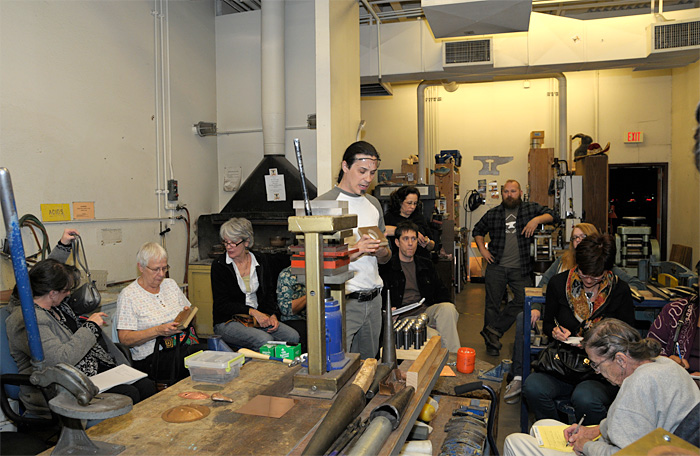 In 2012, Metalink sponsored a demo at the ASU Metals Studio on Low Tech Die Forming by ASU’s Visiting Professor and MFA alum, John Tzelepis (center, above). This is a technique that combines the principal effects of the hydraulic press and chasing and repousse with neither a press nor pitch. It is a technique John learned from metalsmith Keith Lewis at a workshop. I learned this technique as an undergrad at UT Austin with Thelma Coles but we worked a little differently and I think this version has some advantages. You need minimum 3/4 inch MDF and masonite, which you laminate together. You’ll need a scroll saw or similar to cut out your designs. Keep the edge of the design at least an inch from the edge of the block. 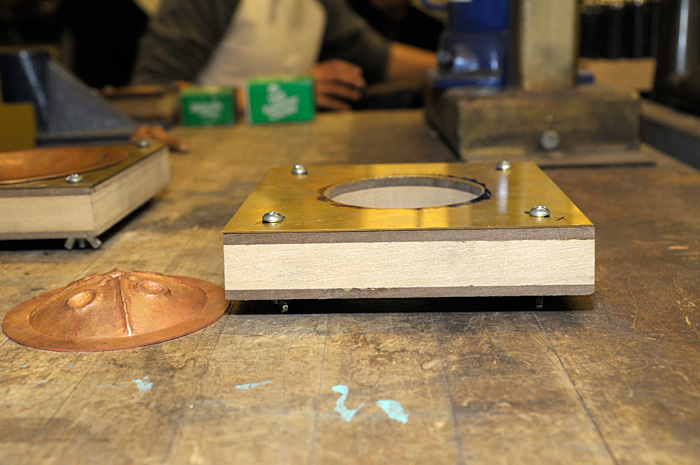 You will also need a sheet of 16-18g brass. Cut the brass to exactly match the edge of the MDF/ masonite design. The brass serves as a sharper edge to the wood and allows you to get a really crisp edge on the die-formed piece. Drill 4 holes approximately 1 in. from the corners of the die on the diagonal. John uses the same size screws and drill bit for all his dies, about 3/8 inch. Any standard screw with sufficient length will work but make sure you use wingnuts to tighten rather than regular bolts. It’s easier and faster to remove the screws. 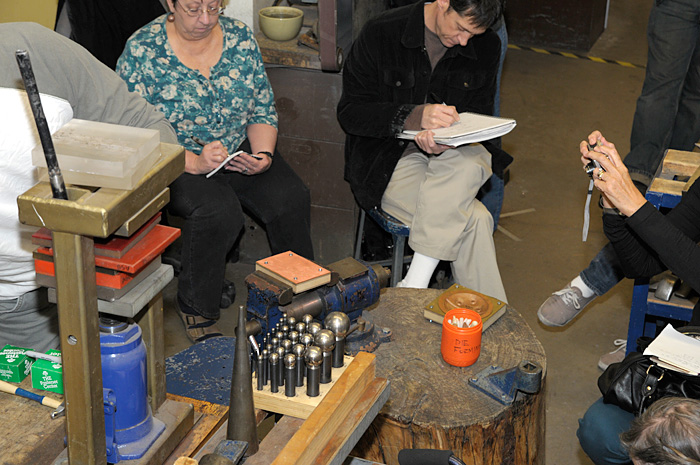 Die with 18g copper plate screwed in and ready for forming

Drill matching holes in your plate to be die-formed. John is demonstrating with 18g copper. In this photo, he has set up the plate in the jaws of a pretty good-sized vise, which is optimal. If you don’t have one of these, you can clamp the piece to the side of a table, which is what he does for larger pieces that don’t fit in a vise. 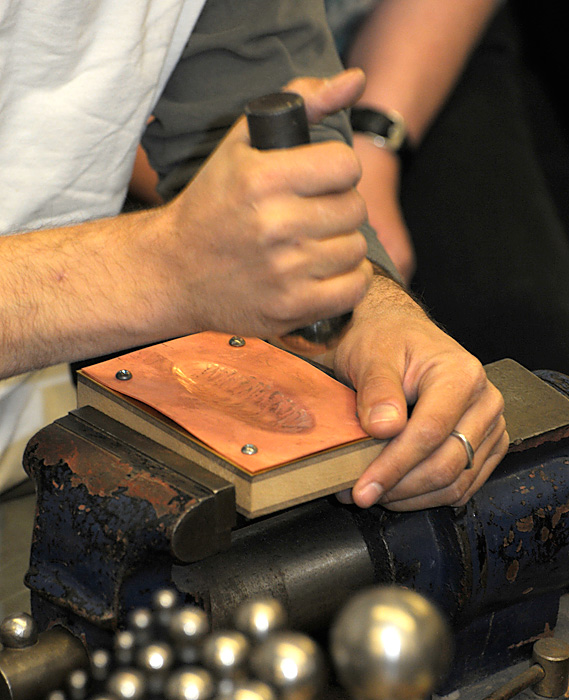 John is using a large dapping punch and just pounding into the hollow form underneath the center of his copper sheet. You can use a ball peen hammer but this method is gentler and is less likely to warp or smash the brass plate underneath. You can also hammer with rounded wood or Delrin dowels. 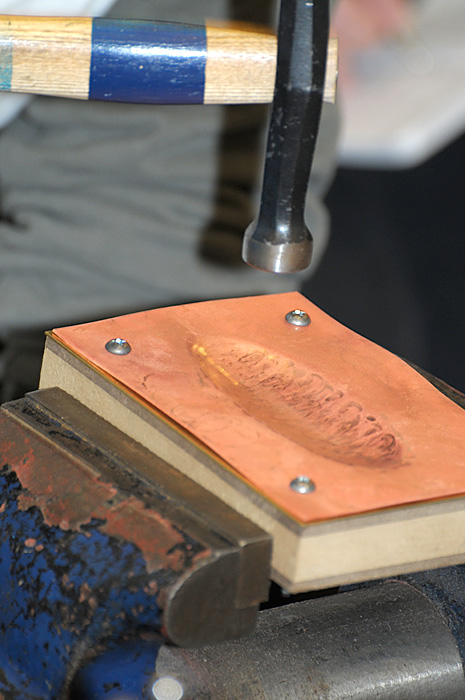 As you work the plate, the screws will hold the metal in place but the piece will start to lift away from the die as it is pulled inward. Take a nice planishing hammer and gently tap the plate back down around the edge of the opening. This will help create a nice sharp edge on the piece and also keep the metal true to the shape. 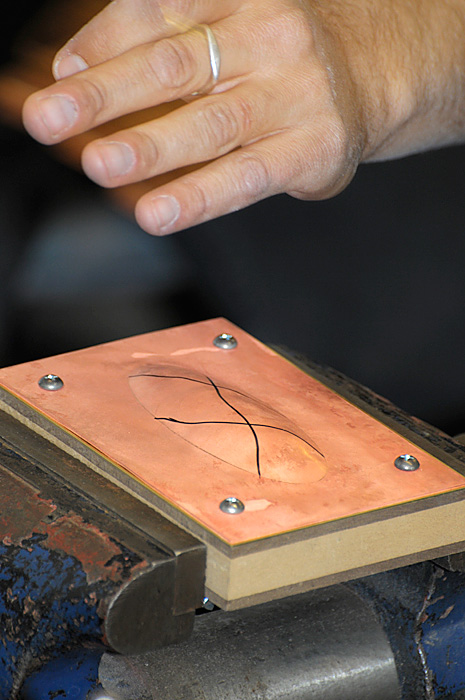 Pillowed form complete, the plate is turned over and the top is worked

Once you have pillowed the form to the desired height, you can reverse the set up ON THE OTHER SIDE of the die (flip the MDF/masonite AND brass) and work on the top of the form to create detail. The screw holes will only line up one way so unless you make some alignment marks you may have to play with it until it all fits back together. This is normal. Here John has drawn some lines he’s going to chase. He used traditional metal chasing tools for this part. 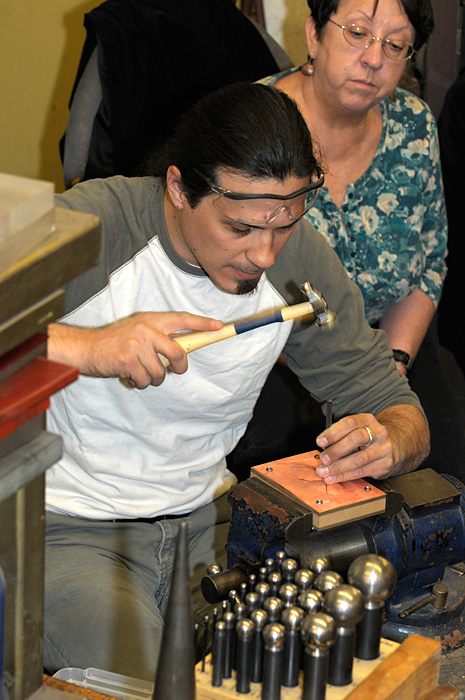 First course- chasing line detail. In this photo, John is also demonstrating the WRONG way to wear your safety glasses :-)

A note about annealing: Typically, you want to pull the die-formed plate off and anneal in between courses, however, it really depends how quickly you are trying to push the metal. You can puncture/tear through your plate if you let it get too work hardened, especially in tight areas. So pay attention to how the metal is behaving and use your best judgment. 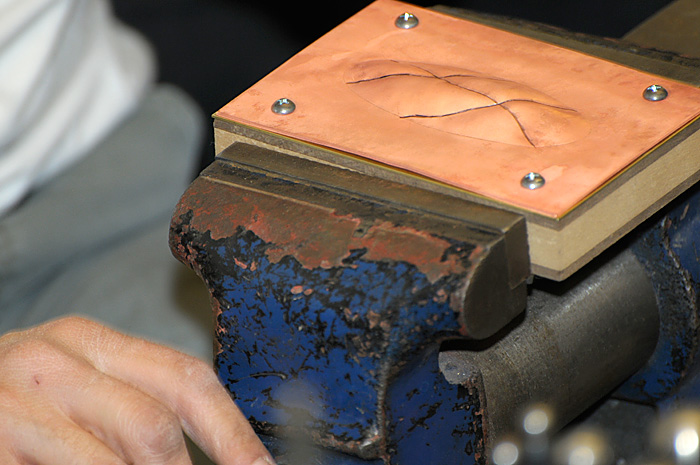 John pillowed the form, flipped it and chased the first course of line design before he annealed this piece. 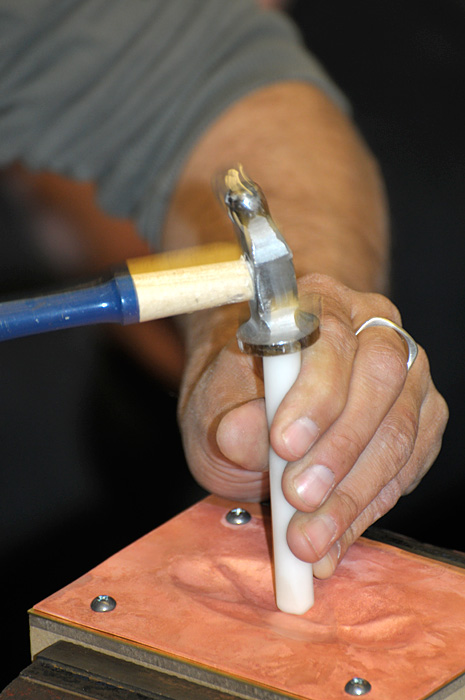 After he annealed, John flipped the piece back over and with Delrin and hardwood tools he made (John likes Maple), he punched some of the height back into the un-chased areas. The wood/ Delrin tools are non-marring so you get very nice soft pillowed forms this way. By working both sides you also increase the height difference in the design. John worked two courses of deepening the lines on one side and pushing the un-worked areas from the other. 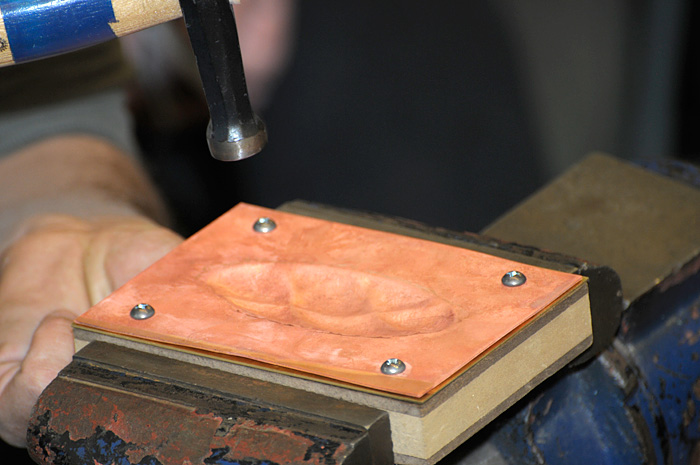 Remember to true the edges periodically throughout the process 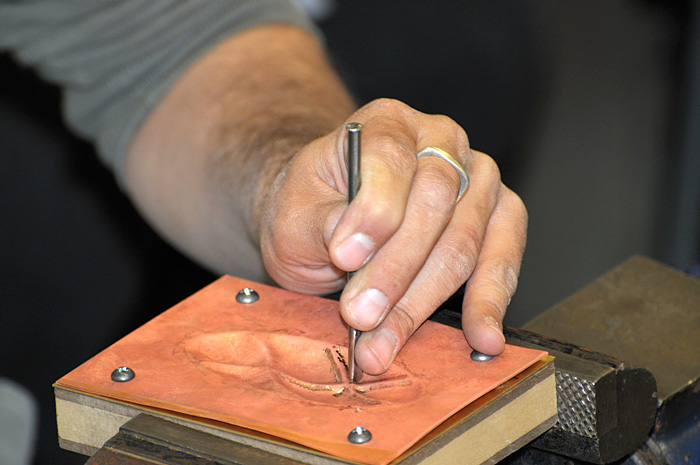 Increasing line detail from the back 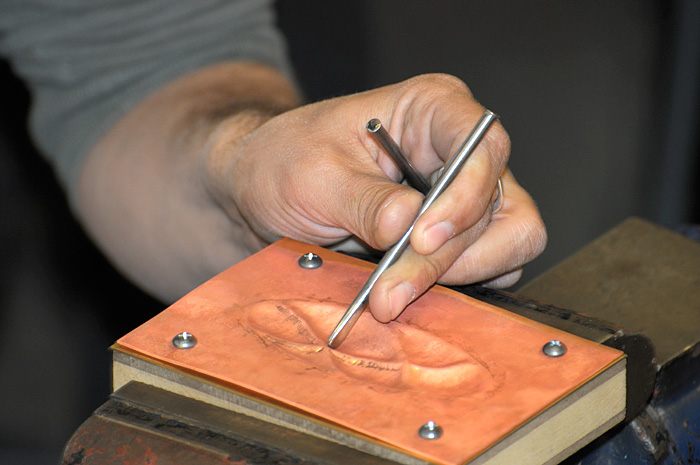 More of the same

In order to create a sharper line detail on the front, John finished the demo by demonstrating how to push the channel of the line closer together from the back. This sharpens the line. He again used a traditional metal chasing tool rather than the Delrin/ wood tools. 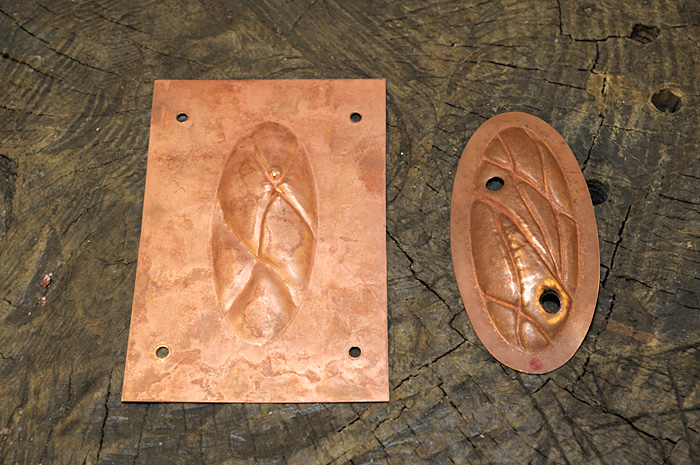 Our in-process piece and a finished version

This is a great process for anyone who can’t afford a hydraulic press and who doesn’t want to mess with pitch. It’s relatively immediate once the die is made. John said the dies last indefinitely if used properly. I suspect the only part of the die that may need replacing over time would be the brass plate.

"We all live downstream."